Golly gosh two posts in one month! Just thought I'd share my finished blanket. It is about 5ft square. 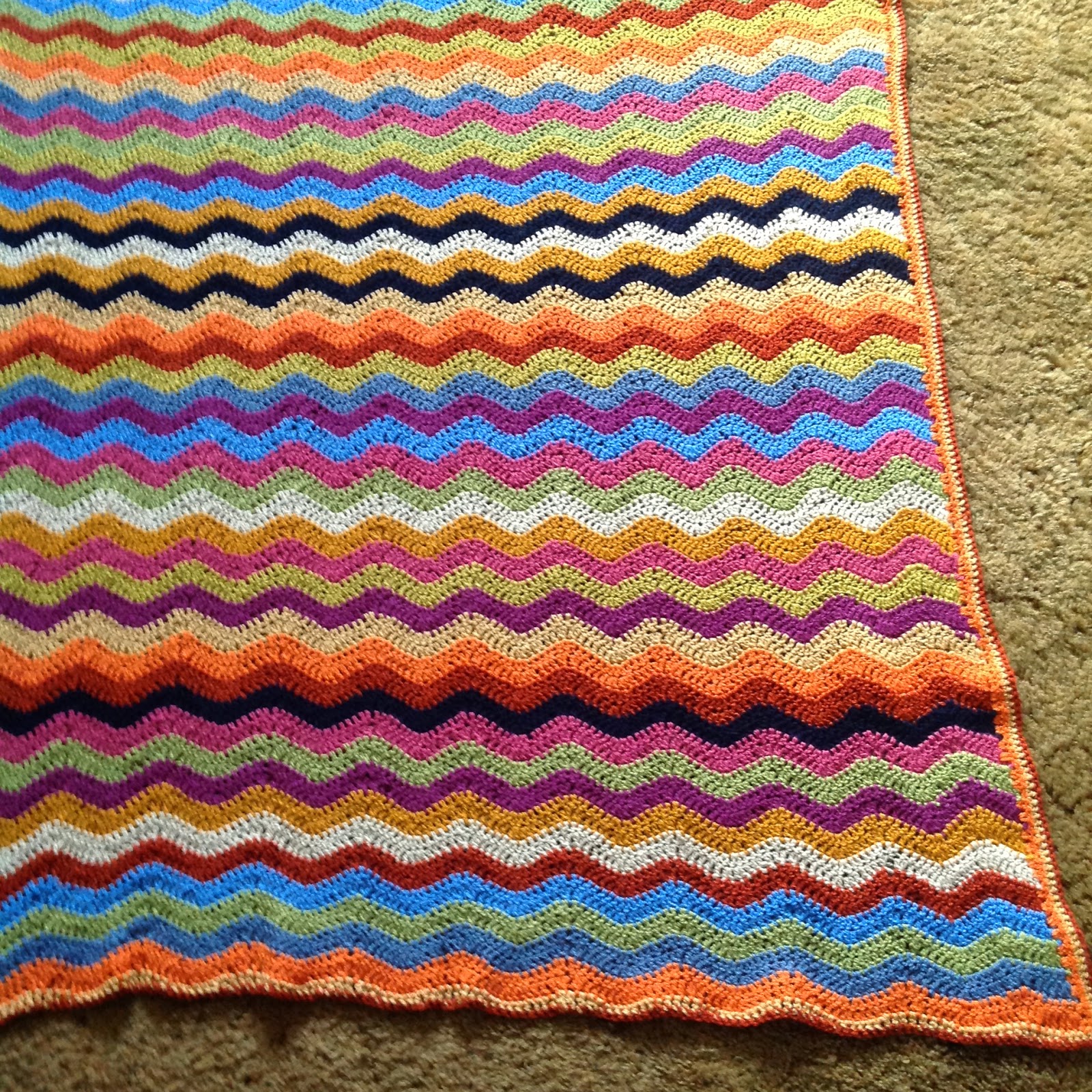 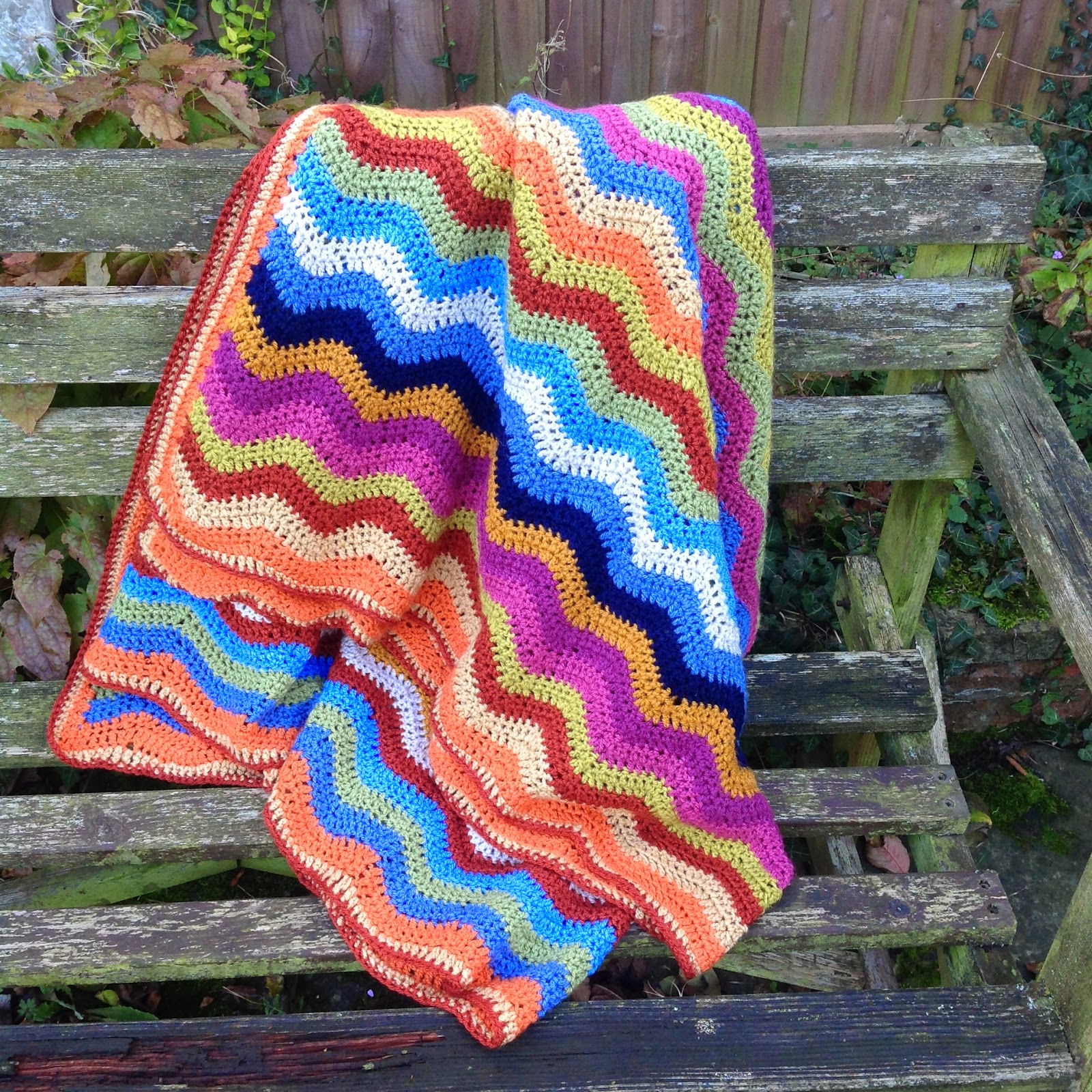 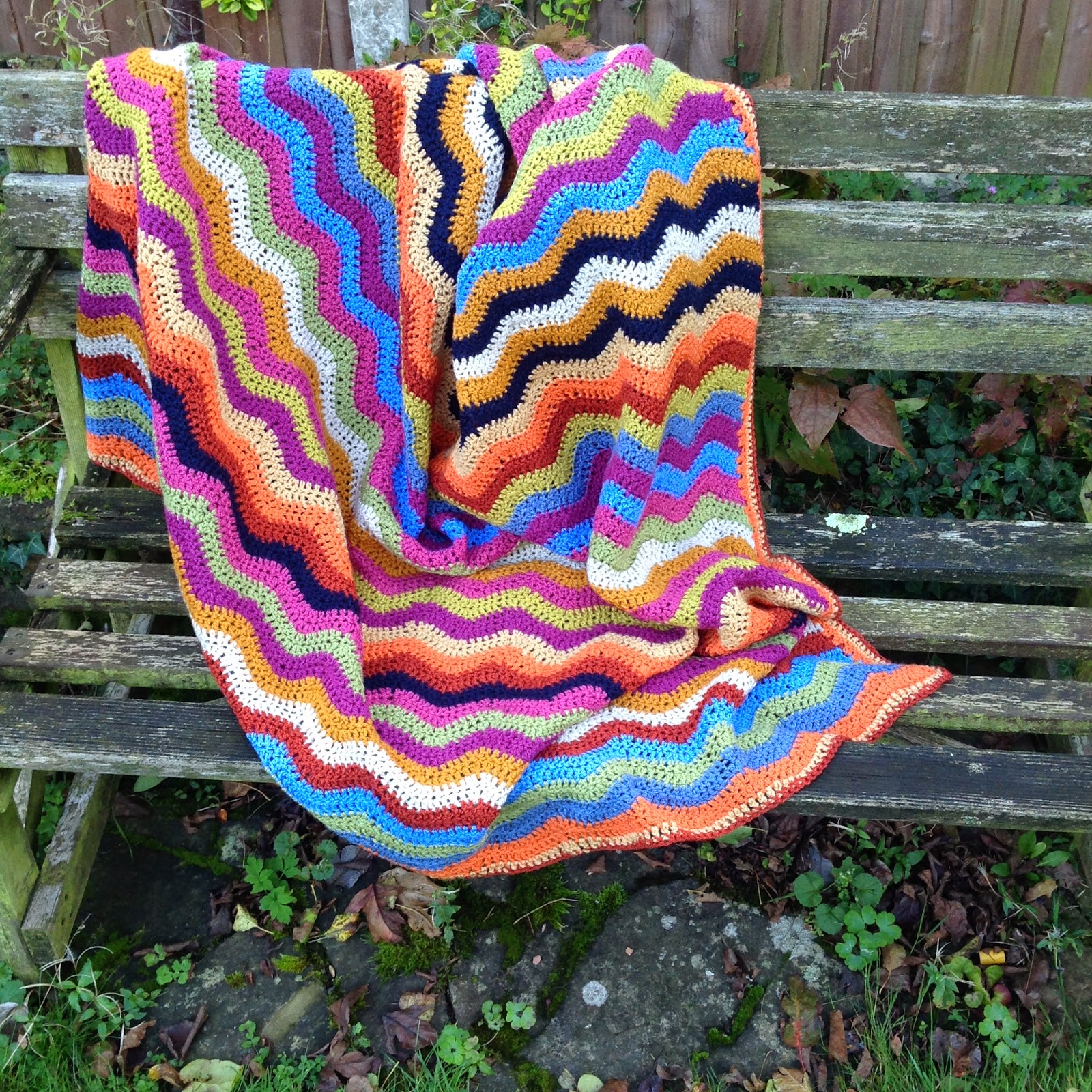 My crochet isn't as neat as Lucy's of Attic24, but it is lovely and drapes beautifully, and is very snug. I did not expect to finish so quickly but I'm in need of some mindless occupation.   I've now decided to use up the left over yarn, plus some more to make a "Babette" blanket. I'd never heard of one until browsing Pinterest. They are made of different size squares. This one will be much smaller, maybe just a metre square. I've made a start. 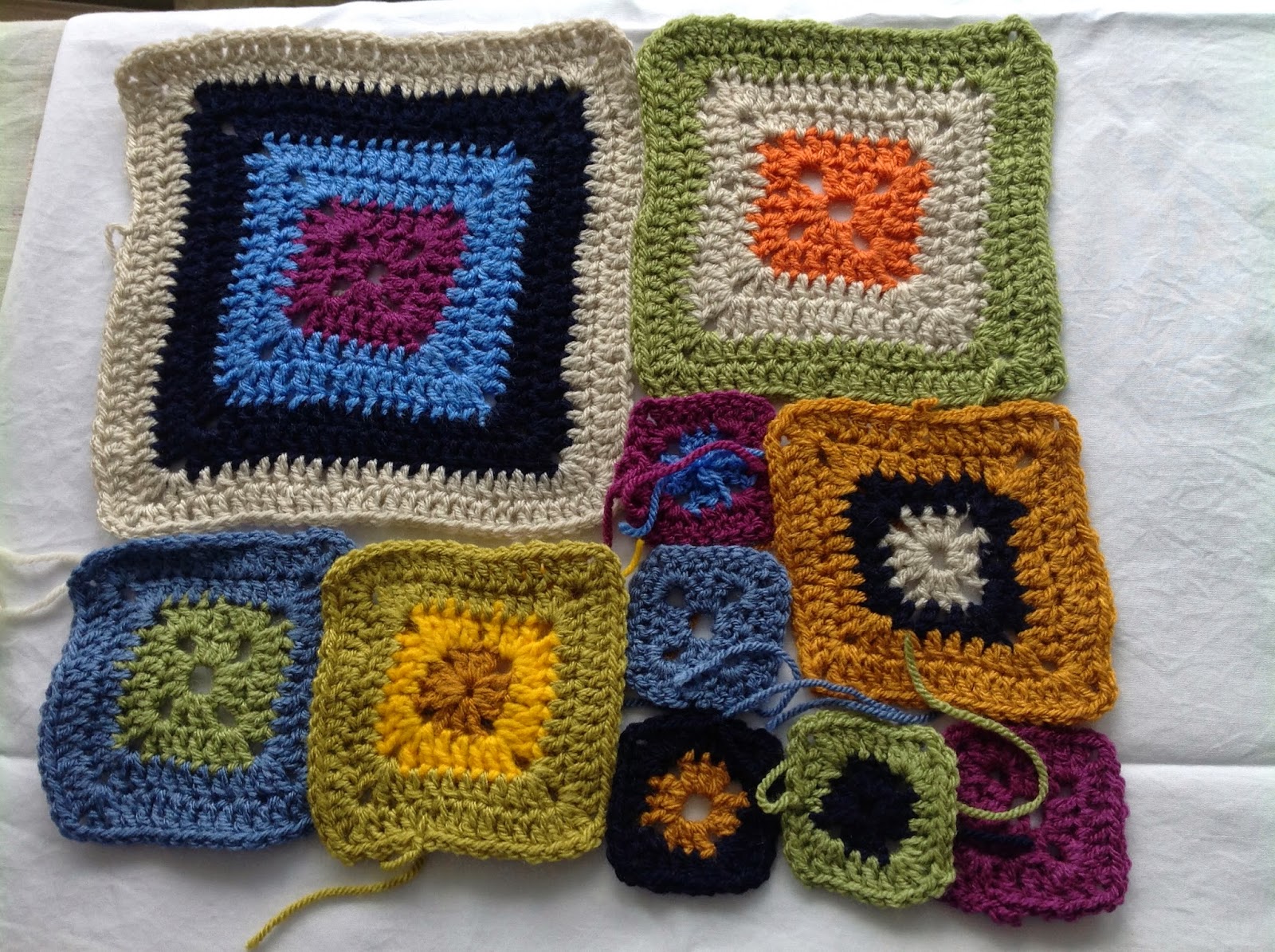 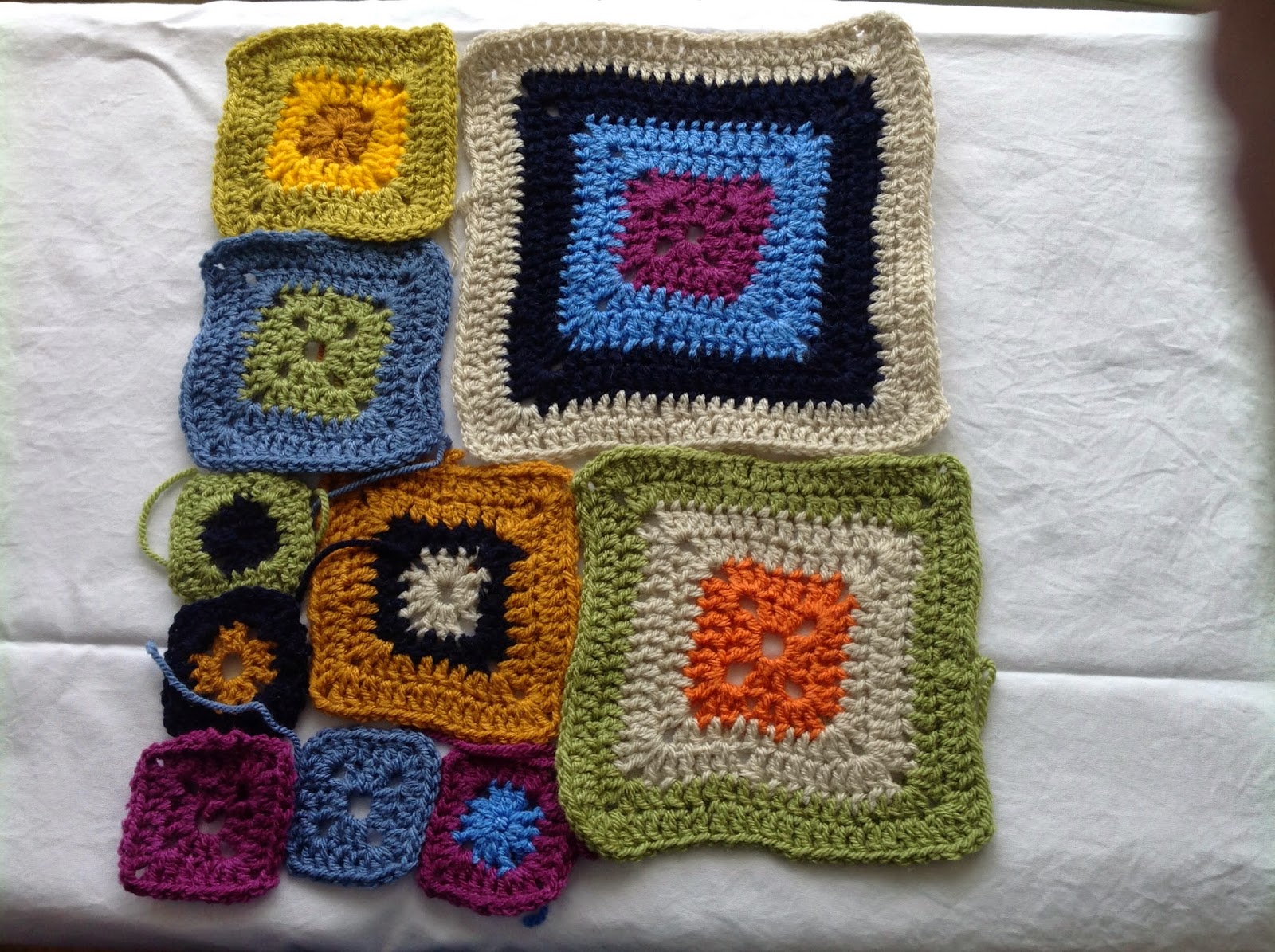 What will be fun is deciding how to arrange them. I think I'll join them up as I go along, so I won't be left with a mammoth task at the end.  I want something less bulky.

Mungo has begun to sit on my lap, but only if I have a blanket or a bit of fleece on it. Here he is trying to share the chair with me. So a smaller blanket would be useful. 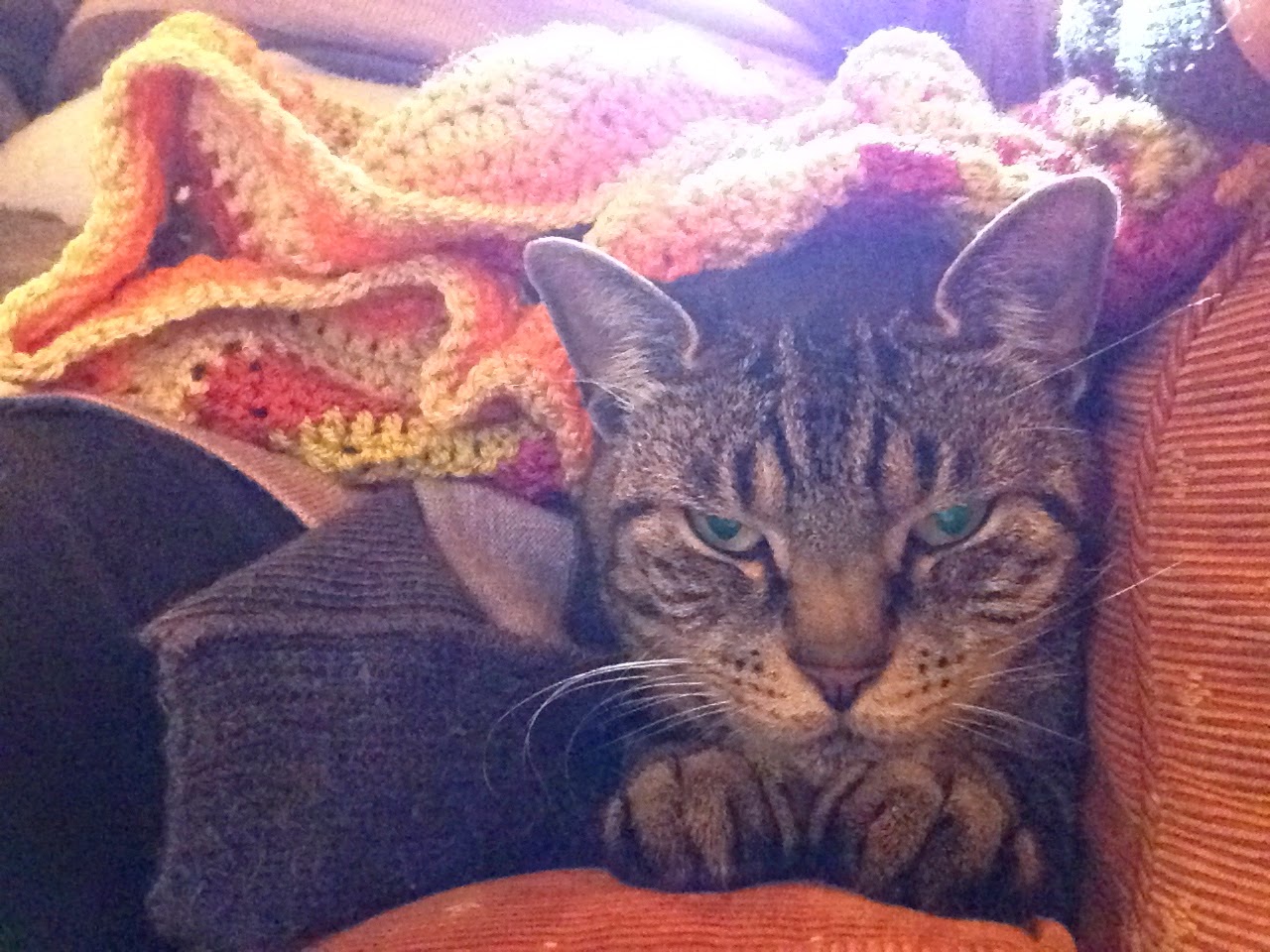 He looks so grumpy. However he was there first!

I've also order some yarn to make a poncho in the style of my scarf on the previous post, but it will be a bit of an experiment. Watch this space.
Thank you for all the kind mentions about the dizziness.  Thank goodness it is not too bad at the moment.  I am limiting my time on the iPad, as the way the images swoosh past may have been triggering it.

Meanwhile I'm putting off sewing, my machine is gathering dust. I have some projects in mind and have been playing in my sketchbooks. However I'm feeling a bit rudderless. I still miss the discipline of following my one-line course. May resort to a few basics to get me going, I'll let you know!

Don't get blown away, its rather breezy here in Bedfordshire.
Jill

The last few months I have been...

When Gina told me yesterday that a mutual contact had asked if all was well with me, I realised how long it is since I last wrote a blog. Although I mainly 'do' Facebook these days I had thought I would try to write a monthly blog but I have failed. There are several reasons for this. Despite the possible evidence to to the contrary I have been going though a protracted blank phase of not being able to motivate myself to do anything. I have had an on-going problem of dizziness since last spring. An MRI scan could find nothing wrong, which is reassuring, but also no comfort when no remedy can be found. The ENT dept put it down to vestibular migraine - dizziness instead of / as well as a headache, but I'm not convinced as dizzy spells last days, even though they're not severe enough to stop me carry on with  daily tasks, I don't feel like doing a lot else.  Having read something on FB, it could be down to the iPad. The movement of the image on the screen apparently can effect some people, but I had mine a year before the trouble started.  I'm going to try to severely ration myself for a week or two to see if it helps. I've tried a food diary and stopped drinking red wine, but can't spot a trigger. A GP said it was down got me to try to figure it out. Sometimes I think it is tension, other times sinusitus. Of course the other factor is, having nothing else to think about. I'm trying to keep busy.. but.
Now you know why I haven't been blogging, no one wants to read about someone's symptoms.  Anyway, since June I have been doing a lot of crocheting. This is productive, repetitive, creative, mindless and soothing.

I started with a couple of scarves. (Free pattern here) 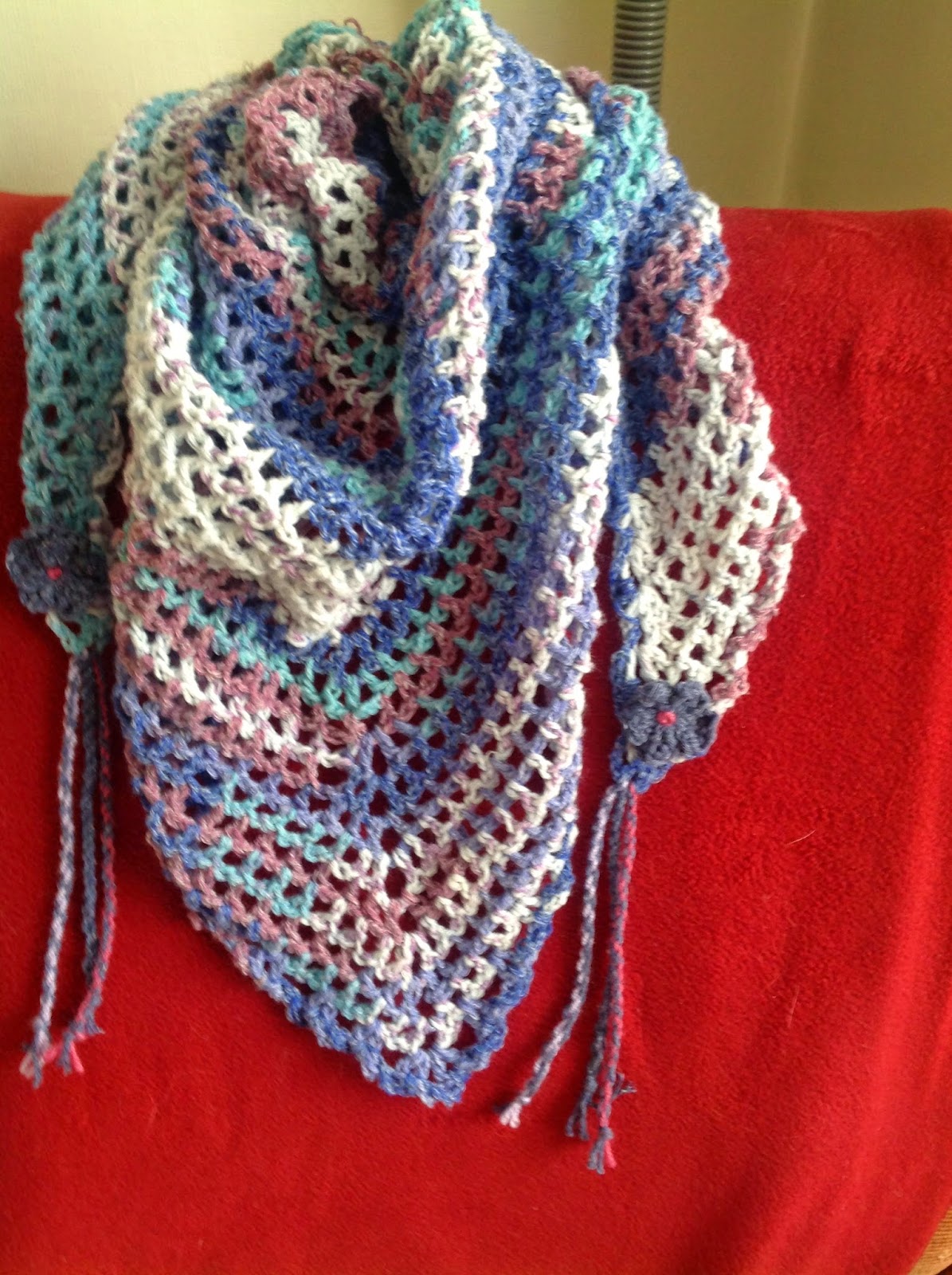 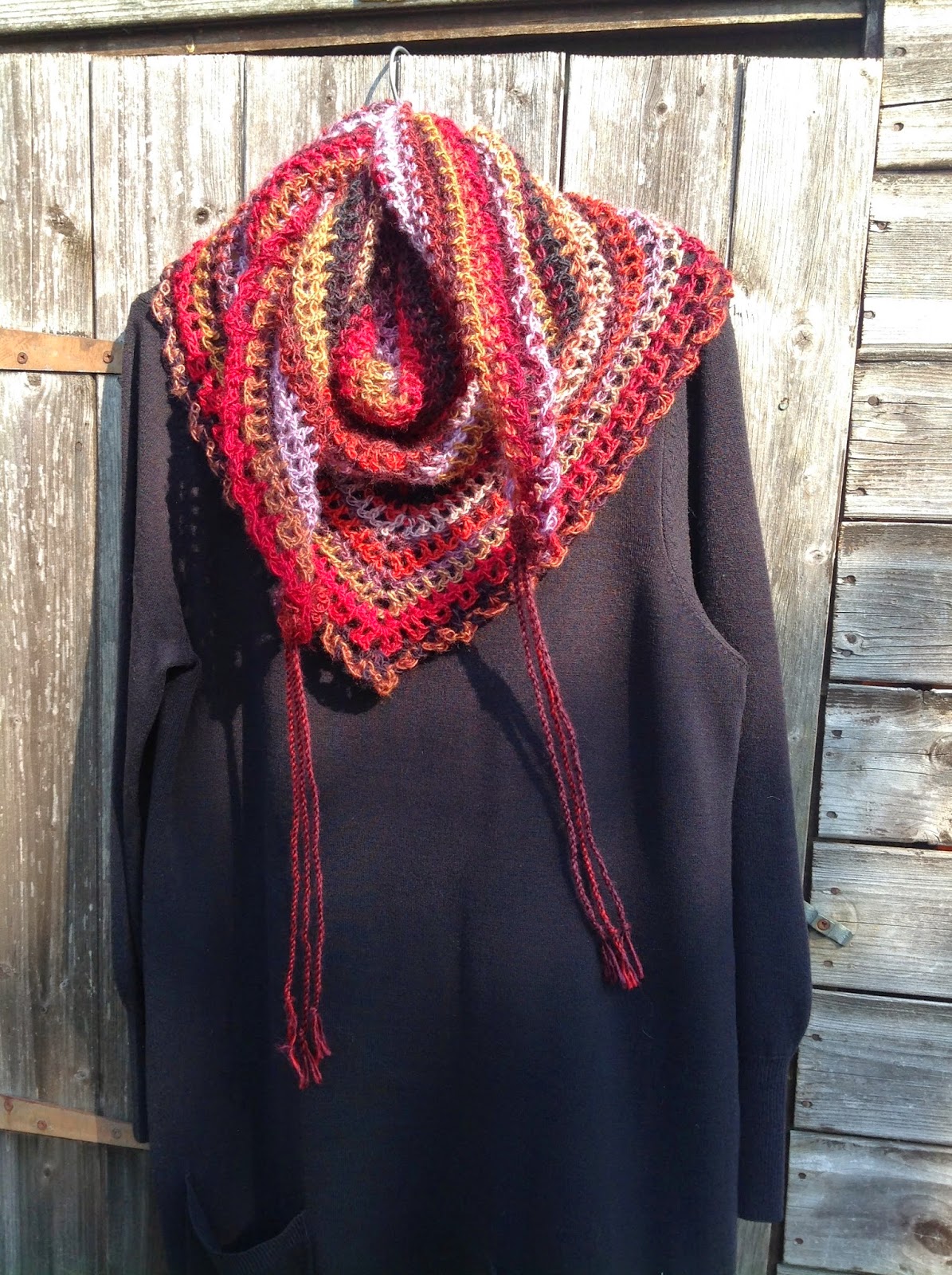 and now I'm working on a blanket, 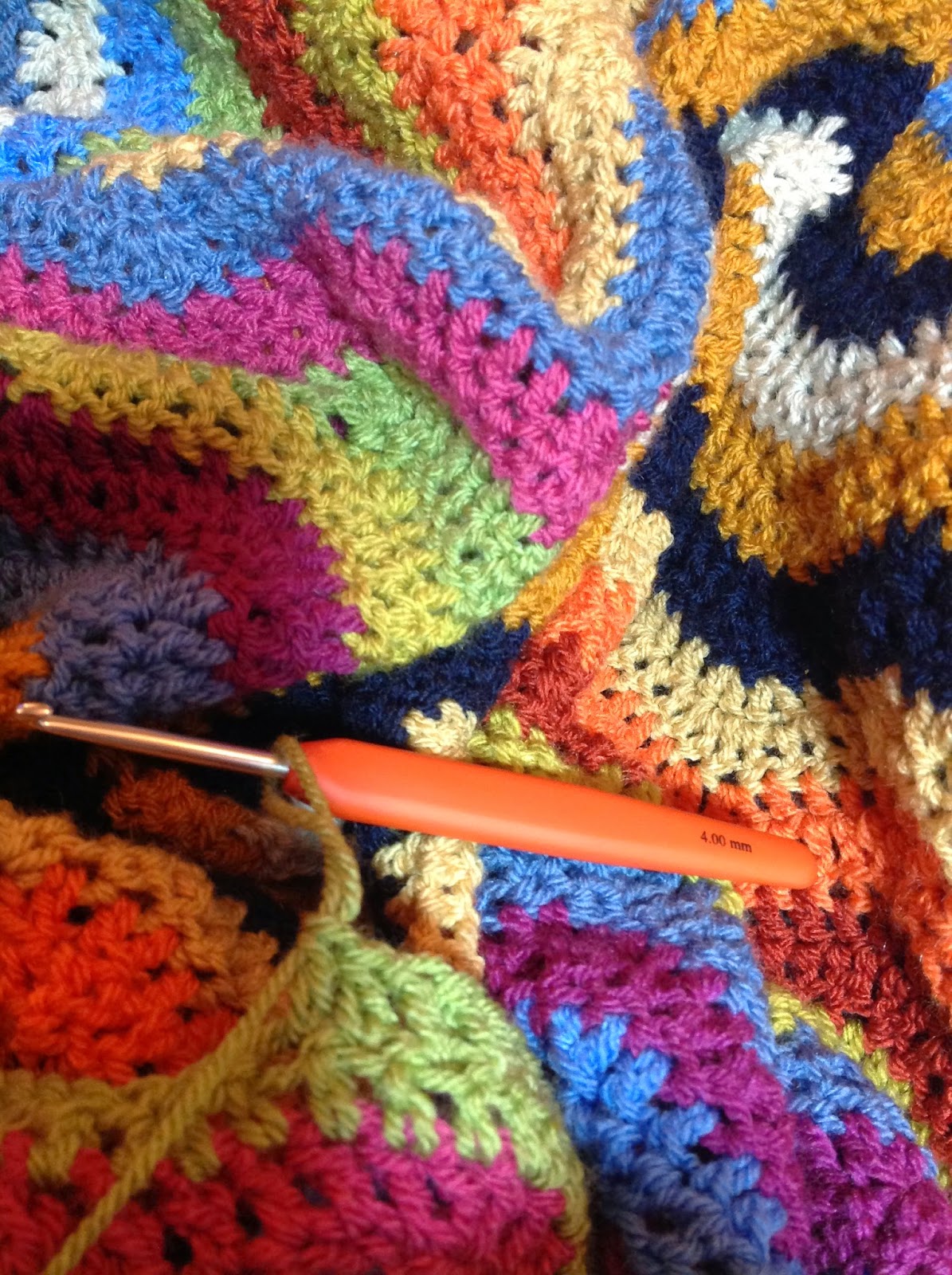 it will be about 5 foot square when finished. I'm about three quarters way through. It is a ripple pattern. Here is a picture from a while back when I just got going on it. (For pattern see Attic24) 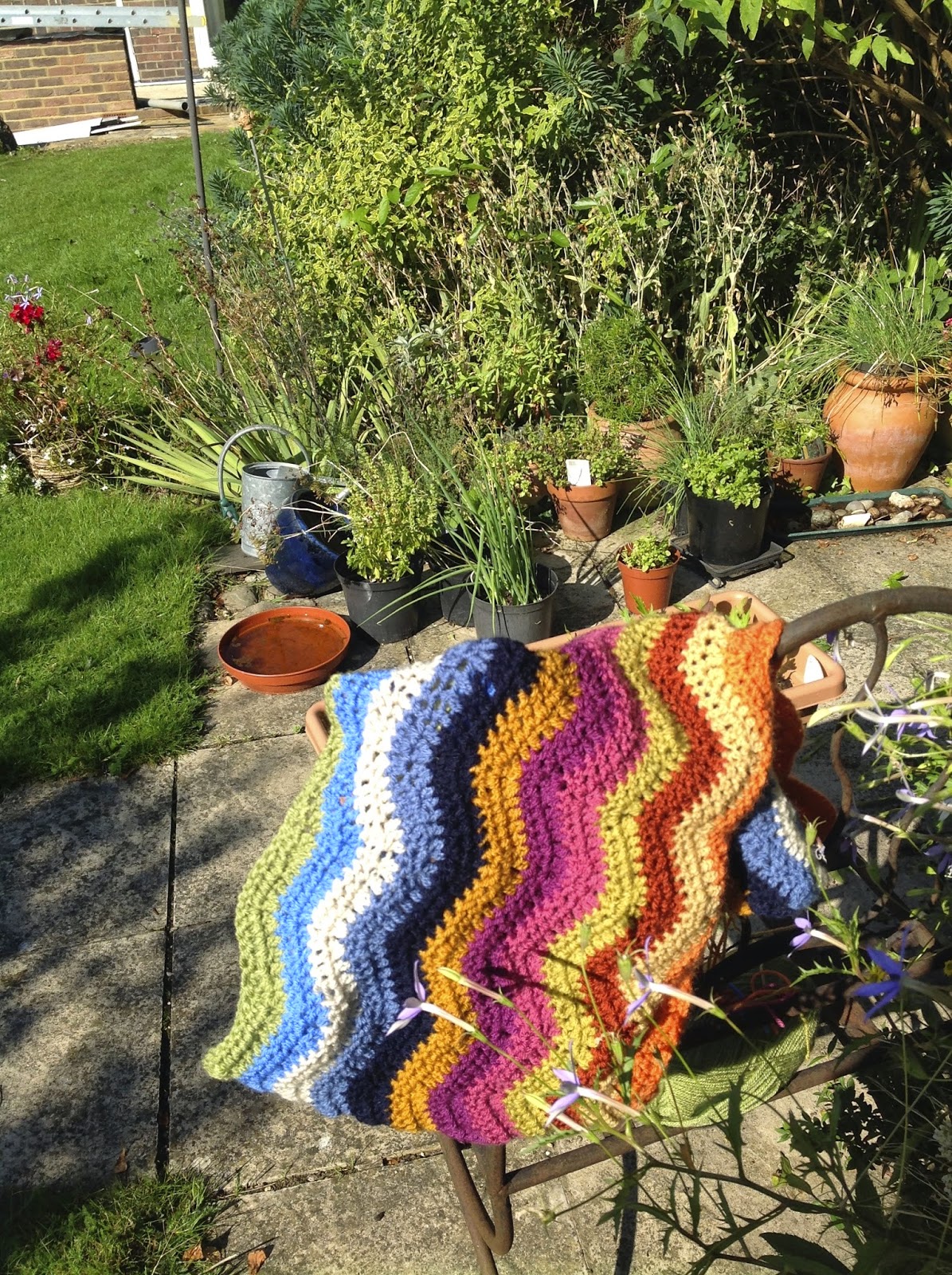 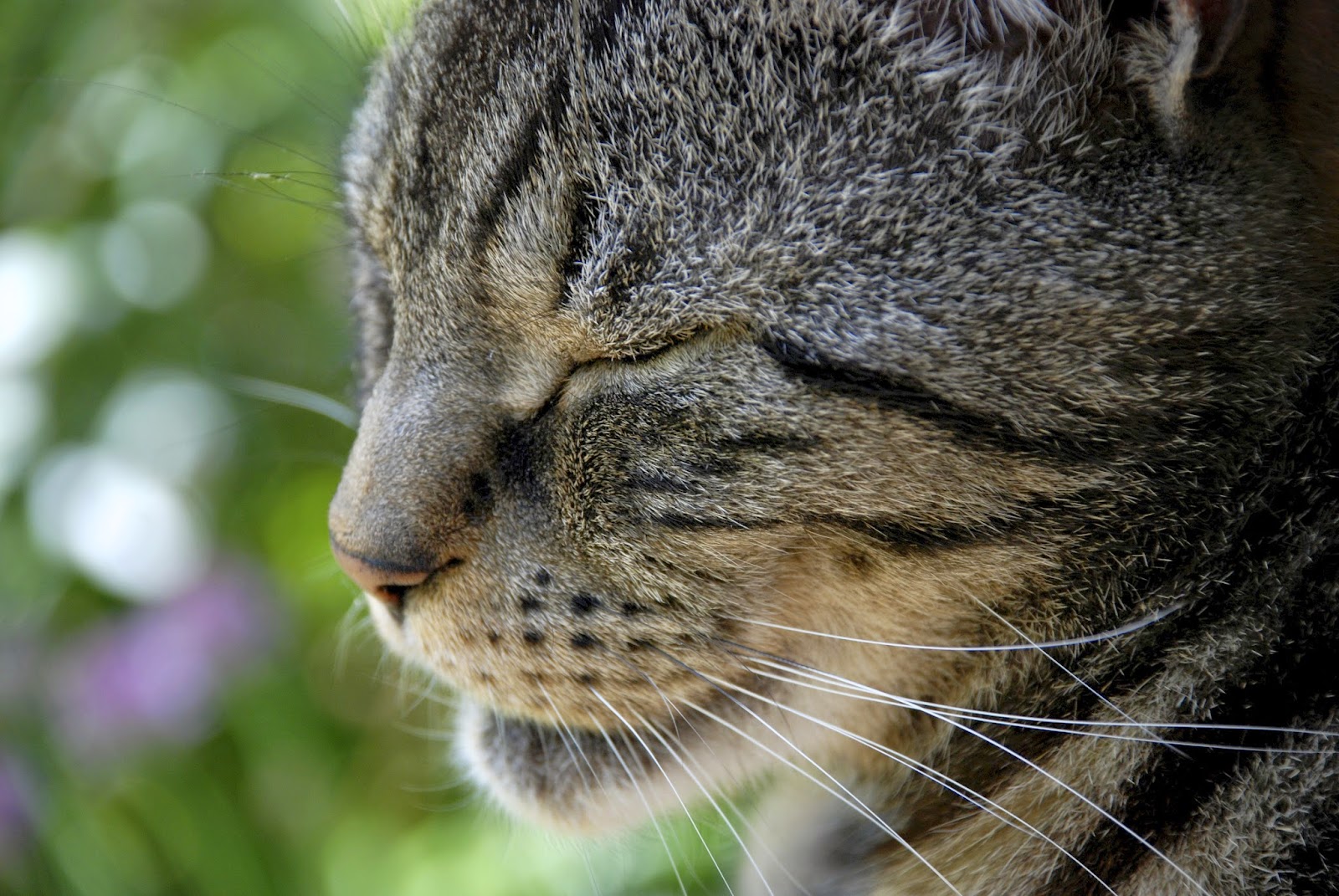 In July we had a bit of a crisis when Mungo went missing. Just in the peak of the hot weather he didn't come home for five nights.  I was so worried he'd got shut in someone's shed and would die of heat exhaustion.   I put out flyers and posters and rang every possible agency short of the FBI.  We were just contemplating picking up his bowls of dry food etc. but at 3.30am Mr T got up to visit the bathroom and heard this plaintive cry from the kitchen. There he was! He was very hungry, but otherwise fine. If only they could tell you where they'd been. 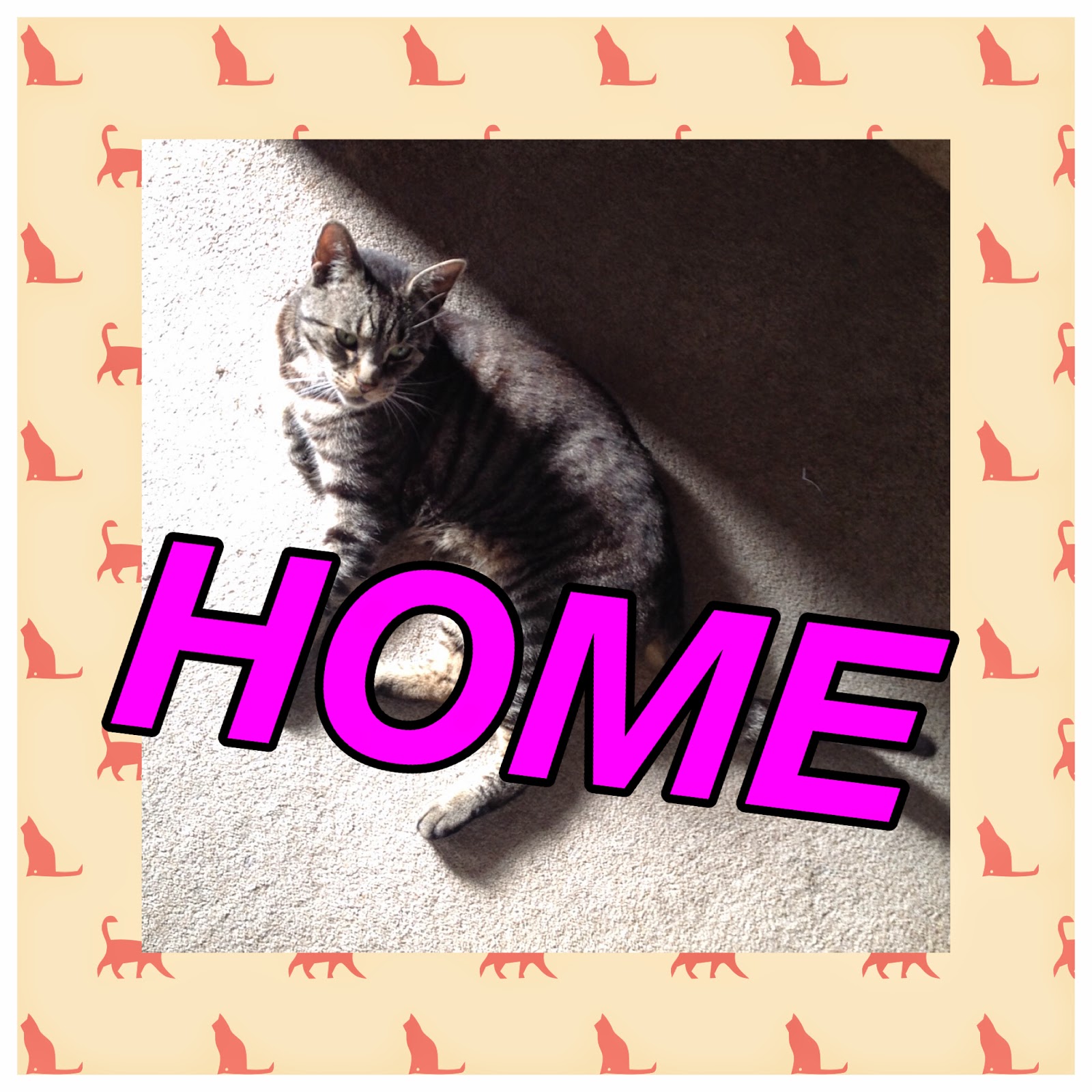 Meanwhile we have had our old conservatory replaced.  We had to find homes for all this 'junk'. We did get rid of some of it. 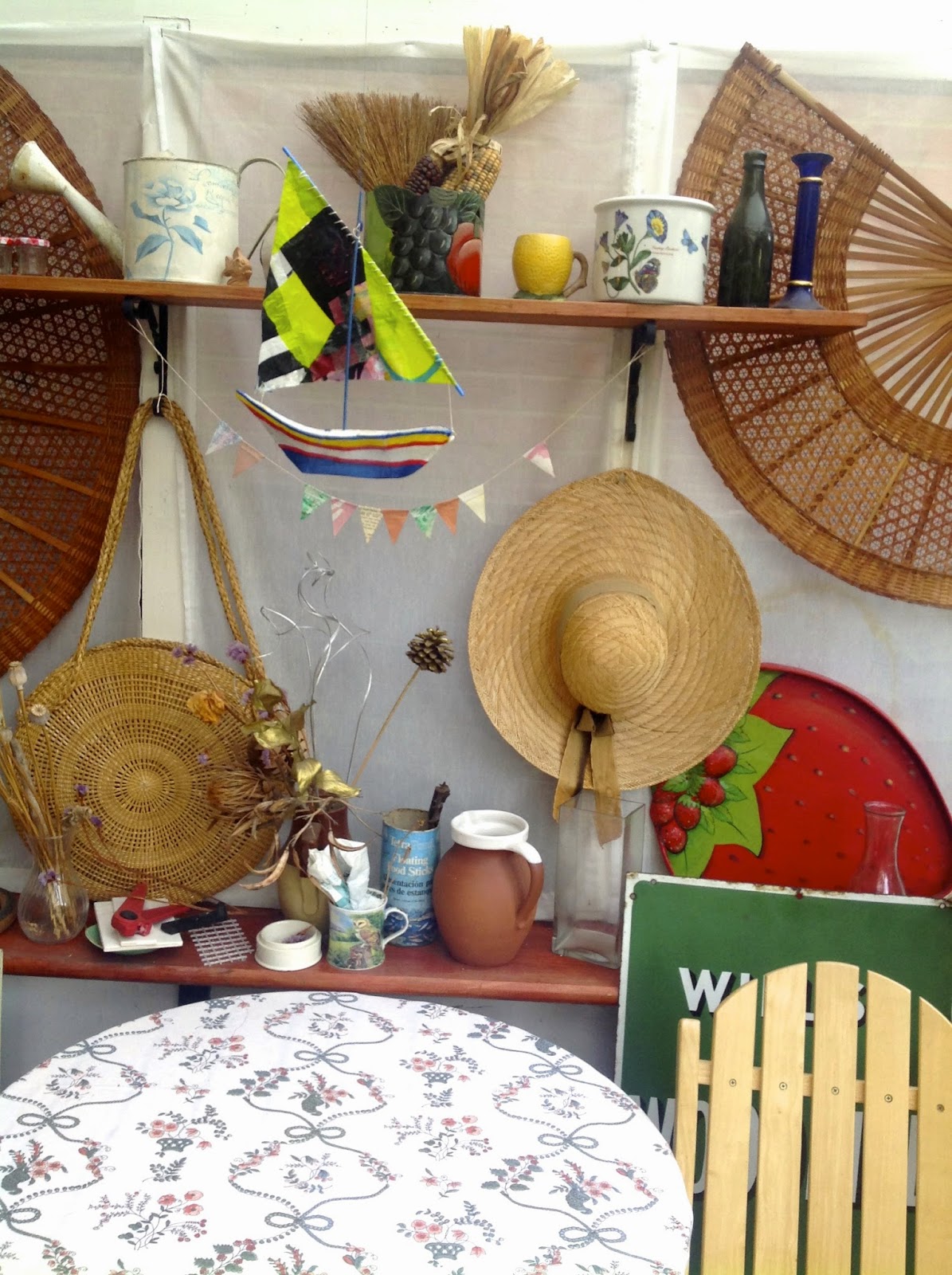 I'd mainly acquire a lot of the 'stuff' to camouflage a rather ugly, rotting lean-to, but grown rather fond of a lot of it. Not sure how it will fit into my lovely new pristine conservatory 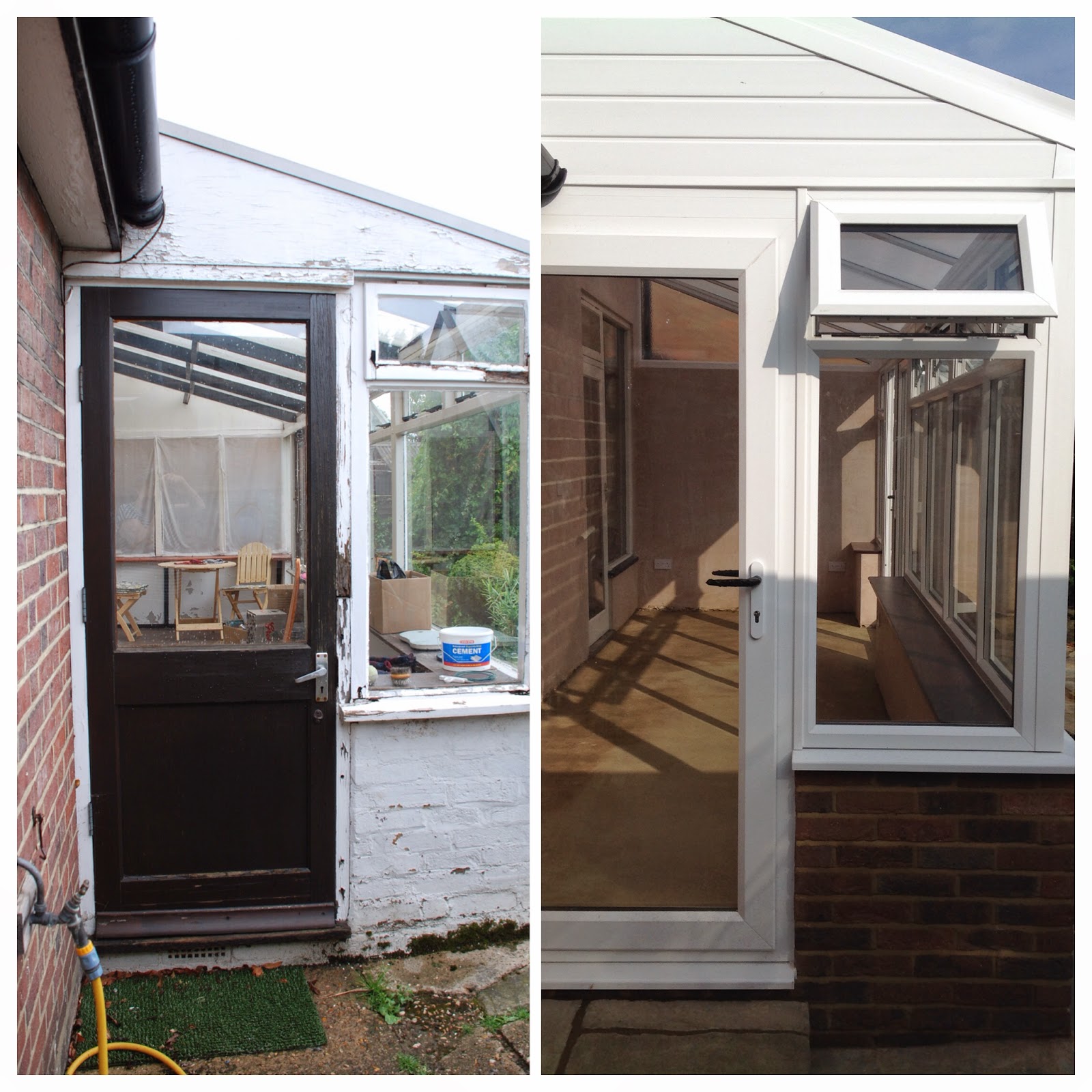 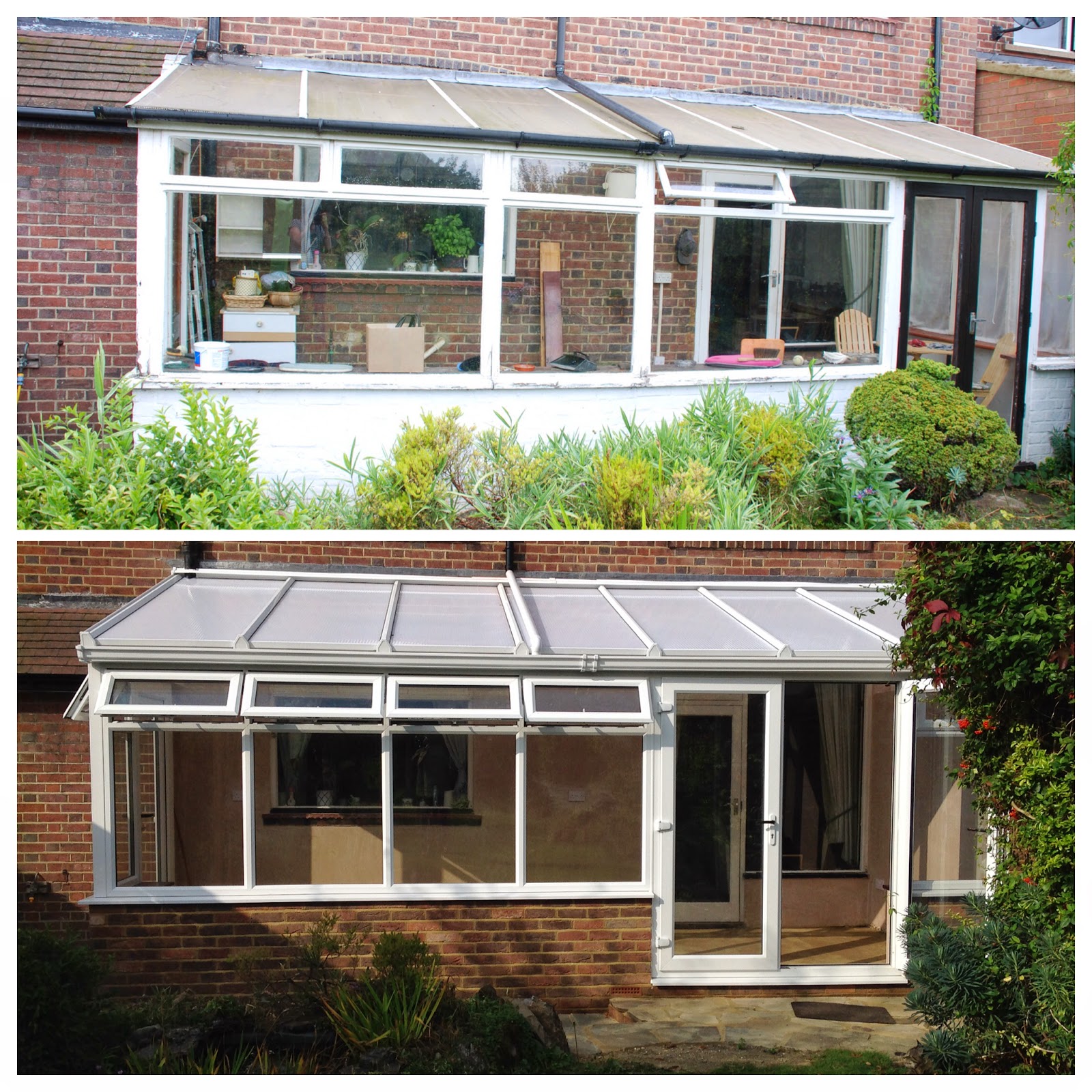 We now have to decide what we're going to do with the inside.

On my creative side,  I'm treading water. I'm committed to creating a piece for Spectrum next February, but it has been dragging on.  I want to get it started, but here I am on the computer, and my brain is hurting. So bye for now, hope you are well and I'll try and catch up on your news too.
Hope you enjoying this wonderful weather too,  I had lunch in the garden today. It would be Mum's birthday, can't remember doing that before on the 2nd October.
Jill 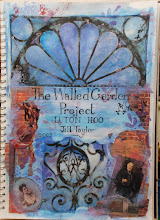 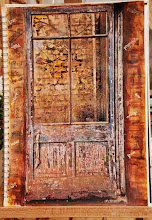